It's amazing how many thing can happen in the space of a few days isn't it?!

I crocheted the first of the cute little crocodile stitch bootees last night and they are so dinky.  I tried a small swatch to check that I liked the yarn colours and I think it looks really pretty.  I bought this yarn nearly 30 years ago when I was working in Buckley, North Wales.  In fact, I bought 2 of the giant balls and made a top for my mum out of one but never did anything with the other, until now.


If you've never tried crocodile stitch then please do as it's really easy once you work out how to hold the crochet at each stage.  There are plenty of tutorials on-line but the instructions in the pattern were very clear and simple to follow.  It certainly didn't take me long to crochet this sweet little bootee.

These are very teeny-weeny as they are for a newborn to about 3 months and so I didn't crochet as many layers of the crocodile scales - the pattern had 5 layers but I felt 3 was enough as more might swamp a tiny baby.

I just need to sew on 2 buttons at the side to fasten.

Tinker has been doing really well since his operation but I forgot to write about what happened immediately afterwards.   At first he seemed fine and very perky but after a couple of days he started drinking lots of water and went off his food so we were worried about him.

We went back to see the vet and although she couldn't spot anything she thought that he might have a tummy upset and suggested we take a urine sample to check all was OK there.

So we came home with all sorts of goodies -  some medicine for his tummy which I had to squirt into his mouth twice a day before food  using the little syringe and some granules for his litter together with a pipette and sample tube for his urine.  When it was analysed the vet said that he had a urinary infection, poor little fellow so he had to have a course of tablets to get rid of that.

After the first 2 tablets he got his appetite back and he's gone from strength to strength thank goodness. 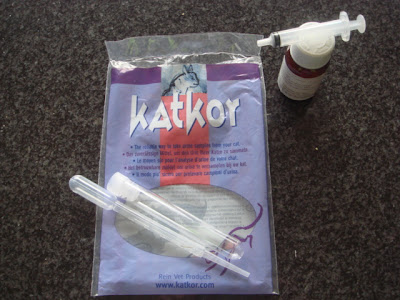 Every so often someone does something nice that brightens your day.  It doesn't have to be a big thing, a smile, a wave, holding a door open perhaps.

Today I was browsing in a shop and I saw this sweet little seahorse in a display on a shelf.  I love seahorses and like to incorporate them into anything I make using shells and so I asked how much he would cost.  The lady smiled and said that I could have him for free as he'd come in a box with some other things and she hadn't intended to sell him but had no use for him.

Thanks Blanche, you made my day. 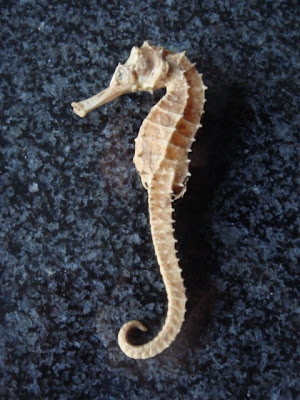 My chest didn't feel quite as grotty this morning and so I decided to do some intervals on the treadmill.  I managed 3 miles but then my chest started to hurt and I had a massive coughing fit and had to abandon it.  It's a good job I'm tapering this week so it didn't matter too much.  I just hope I get get it back under control before the Brighton marathon in 12 days time.

Greetings from across the pond 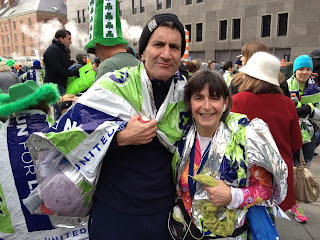 Betsy left a comment recently as she has been running and knitting since she heard about my antics!  In her own words;

"I started running in 2000 but only short distances. I quit my job in 2005 and decided to increase my distance. In 2008 I ran my 1st half marathon. But, being an avid quilter and knitter, I didn't like spending so much time running when I could be knitting or quilting. I remembered reading about you years ago in a magazine. I figured since I can knit while watching TV or reading, why not while running? So, the hours I spent training could also be knitting time! I decided to try knitting a mobeus scarf so I would use circular needles, knit or purl without looking, and only have to carry one ball of yarn. I found Cat Bordhi's website with instructions on how to cast on  - I've made about a dozen since last August, all while running." 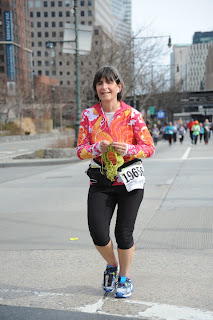 Well done to both of you and thank you for getting in touch.

Hello! This is Betsy and Alan's niece. I've just subscribed to your blog. It's so cool to see my aunt and uncle featured here. I'm a knitter and runner as well (but I don't do both at the same time...yet). Love the blog. I'm going to give these booties a try!

Hi Ruth, how lovely to hear from you too - it's quite a family gathering now. Wonderful that you are a runner and a knitter and you don't have to combine the 2 things to enjoy them!

If you like crochet then the bootees are just lovely and well worth doing. Each time I've shown them to people they've been absolutely smitten as they are super cute.

Oh, I should have said to just leave a comment if you get stuck with the crocodile stitch and I'll try and help.