There's knitting, crochet, an operation, running, a video clip and a zebra!

I finished the 2 colour brioche scarf last week and I think it looks rather effective.  Because it had lots of increases and decreases it was very lumpy so needed to be wet blocked which flattened it out nicely.

The only thing I'm going to work on a bit more is the ends as I don't like that they look so different.  I'm thinking of perhaps some dangly bits to echo the brioche stripes, or maybe a bit of crochet.  It needs more thought but I know the solution will come to me eventually.

I'm really enjoying working on the Crochet Club projects for this month.  This is part of a wavy square and I love the jewel-bright colours.

The bits of paper with yarn attached are my way of keeping a check on my colours.  It stems from years of embroidery kits where you get a card with holes punched in it with little samples of thread attached next to their reference number.

What I do with any knitting or crochet project is to keep a sample of yarn attached to part of the ball band.  That way you have not just the colour and reference number but you also have the dye lot or batch number in case you run out of yarn.  In this instance I've added the colour name too as the written instructions refer to that rather than the reference number. 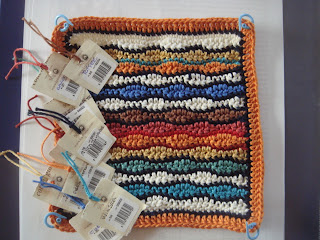 Our poor little chap, Tinker, has had to have another operation to remove fibrosarcomas.  His first one was in  September 2008 and as it was a very aggressive form of cancer we'd been checking him regularly.  Sadly, last year we found another lump and we were very worried as he was 16.5 and when the vet operated he found there were several smaller ones which he couldn't get out.  So when we felt the size of the lumps a few weeks ago we knew that he needed to see the vet again as they'd grown so quickly.

We were very anxious as at 17 it was a huge risk to have another operation.  The vet was lovely and told us there wasn't a right or wrong decision as he is a fit and active cat.  He also said that if he had to make the decision he would probably go for the operation (as it's so aggressive it wouldn't be long before he was feeling ill and we've have to put him to sleep).  Mike was convinced that he would pull through OK and we agreed to go ahead with the op., but I was so anxious I hardly slept for a week and kept crying at the slightest thing.

So on the 1st March we took our brave little fellow off to the vets again and waited anxiously for the phone call.  It was good news!  The operation had been successful and vet was much happier this time as he'd got all the bad tissue out.  The only thing he wasn't sure about was whether his walking would be OK as he'd had to cut a large chunk of muscle tissue away.  When we collected him later that day he was completely spaced out having been given an injection of ketamin, a strong pain-killer.

Here he is, with a massive cut down his side, telling the hearth bunnies all about his ordeal.  The next day he was absolutely fine, eating and drinking well and moving freely without any obvious discomfort although he seems to have stiffened up a bit now and is sleeping quite a lot.  What an amazing little fellow he is and he mustn't have been ready to leave us just yet.  I hope we have many more years together.


The running part (with added video!)

I'm well into the high mileage weeks leading up to my first marathon of the year.  The last 4 weeks long runs have been 15, 17, 18, 18 so it was time for a 20 miler.  This usually heralds rain and strong winds but on Sunday I was blessed - frosty and misty to start followed by sunshine.  Fantastic!

I hope this works as when the sun was peeping out behind the trees I heard a woodpecker so I tried capture the sound on video - you can hear the birdsong first and then the woodpecker joins in a bit later:

I saw this sad notice for a lost dog on several posts.  Although he went missing back in September 2012, there must have been recent sightings as I haven't seen these posters in the area before.  I know lots of local people pop on here to read my blog so please keep a an eye out for Misty.

Inevitably my route involved lots of hilly bits (15 miles to be exact with just 5 miles of flat bits!) so my photos often show valleys.  My home is over the hills and far away at this point!

I always find plenty of things to keep my mind occupied and I love the thinking time my long runs give me.  One day I'll write a selection of some of the things that flash into my mind.  Often I find that the solution to a problem that I wasn't thinking about will just pop into my head.

The grass verges along our country lanes are always of interest.    This pretty little daffodil, a true 'wild' daffodil that William Wordsworth wrote about read here by Jeremy Irons. 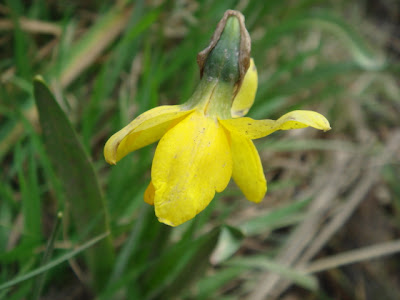 Unfortunately it isn't just pretty things that are found on the verges.  Innumerable beer cans, drinks bottles, take-away wrappers and general litter flung irresponsibly from passing cars by people too lazy to take their litter home. 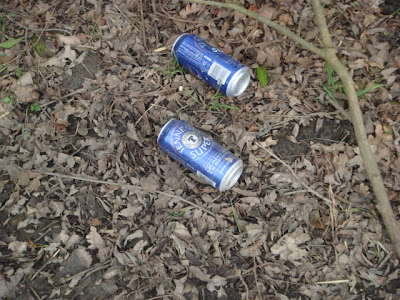 Now Mike did roll his eyes at my next photo - a red telephone box, the K2, designed by Giles Gilbert Scott in 1924.

Now why did I take a photo of it?  It caught my eye, that's why!

Many of them were replaced with an ugly modern version many years ago.  What drew me to this one was it's broken windows and the ivy growing inside - as if nature is reclaiming this little bit of roadside from man.  There was still a telephone set inside and I wish I'd lifted the receiver to see if it still worked. 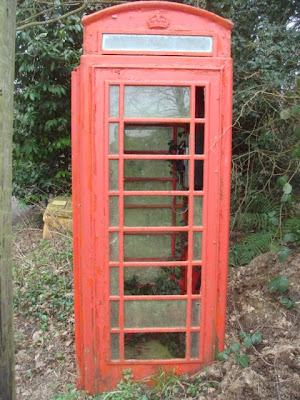 When I'm out running, I often notice things I don't see if I'm driving and this ornate archway was one such thing.  It marks the entrance to what must have been a very grand house once upon a time but is now in a state of disrepair.  I spent some time trying to imagine what it must have looked like in its heyday. 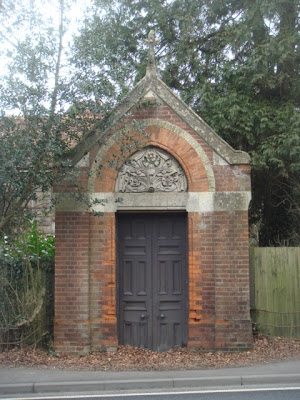 Have I been visiting a zoo?  No, just a country lane.  Each time I run along this particular lane I smile as I pass this garden as over the top of the hedge I can just see the head of a zebra.  No, I haven't been at the loony juice!

It's been intriguing me for ages and on my way home I saw a man coming out of the back of the house and I decided to ask if I could take a photo of it to show Mike.  The man was lovely and offered to let me sit on the zebra to have my photo taken but I went all shy and just took a couple of photos myself.

Apparently he belongs to some friends who don't have room for him at the moment so they are zebra-sitting for them.  He's made of concrete so he's be quite happy outside.  If he's still there next winter then I shall knit him a scarf. 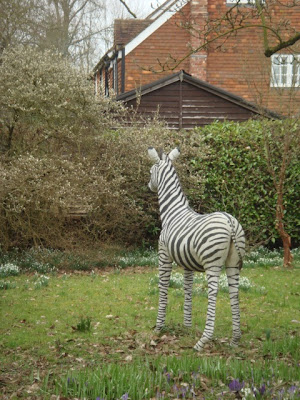 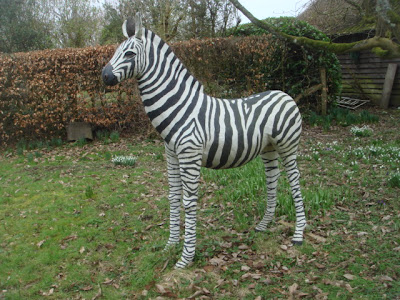 How was my run after all that?  Really good actually and I was very pleased that I managed to speed up in the last 4 miles.  So, 20 mostly hilly miles in 3:51.   That'll do nicely thank you very much!